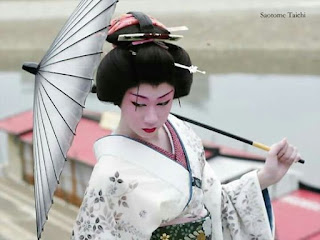 Cross-dressing has some form of history in most countries. In the UK we have Shakespeare with boys playing girl parts on the stage, we also have pantomime where the principal boy is a girl, the dame is a duke and as for the sisters  - they are not all that they seem!

In Japan there is a long history of cross-dressing on the stage in the form of Kabuki and Noh plays, where the actors/actresses were treated as the rockstars of today are.

Noh predates Kabuki by over 200 years and has an long standing influence in Japanese culture. Meaning skill or talent, Noh originated in the 14th century and is very ridged in its traditional style and form.  This style has been maintained with traditional works performed today in the same style as when first conceived over 600 years ago.
A traditional performance would usually last all day with 5 long set pieces with short light pieces in-between sets.
Unlike Kabuki, Noh utilises masks to denote certain characters and moods, with the female roles being undertaken my male actors. Traditionally the plays are only rehearsed once – so each actor and musician has to work independently on their performance, making each performance unique.

Kabuli is a much raunchier form of entertainment when compared to Noh, and has a much more tainted history. (Think opera verses Burlesque and you’ll get the idea!)

In the Japanese Kanji writing style, Kabuki means ‘Dance, Sing, Skill’ and became popular in the red light parts of Tokyo (Edo) and Osaka (Kamigata)in the early 17th century,  where it was the place for new fashions to be worn and where the trendy ‘in crowd’ of the day went to see and be seen.

The Kabuki theatres were often lavish decorated buildings with many rooms with a traditional Tea House attached where food and drink were served, tending to the clients every needs. The patrons at that time were usually men, but later many women also attended, with half of the audience comprising of women from the 18th century. However  the Kabuli theatre was seen as a ‘bad place’ or house of prostitution, often being located in the brothel section of the outskirts of the cities, much like the early music halls were seen in the past here.

The young actors playing female roles were called Onnagata, and were often chosen because of their looks and ability to pass as an attractive woman in the ‘raunchy’ parts of the plays. This was coupled with the male leads being handsome youths called wakashū. This also lead to problems as both sets of actors were available for prostitution for male and female patrons , (no wonder the authorities had a problem with the Kabuki theatres!) leading again to a ban on both the Onnagata and Wakashū for a period in the mid 1600’s leaving only mature male actors to perform in what is official called Yaro-kabuki. 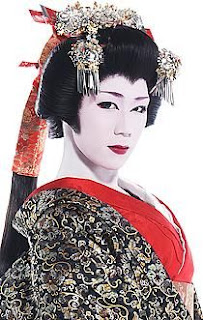 Like Noh, the performances at the Kabuki were an all-day affair, so areas for preparing food for eating and drinking during the show were also included in the building – think of it as the original ‘Dinner Theatre’!! (Debbi Reynolds would have approved!) The performances required the actors to present stage drama, singing and dancing, within the main three traditional styles of production.
The first style is the historical play – Jidaimono - that denotes parts of famous events in Japanese history and was used as a way of sublimely criticising the current ruling classes by using metaphors of what had happened in the past, thus confounding the censors at the same time.

As in all great music halls and musicals there is a need for a song and dance, take any of the Busby Berkeley musicals for example, Kabuki is no exception. Whilst not as restrictive in its style as Noh, the set dance pieces, Shosagoto, are a big part of the traditional kabuki repertoire requiring a high level of skill for the dancers to perform to a stylised dance form, where every movement has meaning.

The lower classes were not left out of the event, as with Shakespeare and countless others, there was a vast array of popular plays that denote love, family, strife and feud. These are the third style and known as the Sewamono or ‘domestic plays’ and had a wide ranging subject matter. There is even an often used plot that follows in a similar vein to that of Romeo and Juliet where true love cannot be shared in life, so both commit suicide to be eternally together.
The skill of the kabuki actor is often measured in their ability to hold a set pose denoting a character, event or emotion. This leads to audience participation and shouting out their appreciation during the performance. Indeed the whole setting for the kabuki is very different than in western expectations were the performance is held continually whist the audience are being fed lavish meals, served drinks and continually talking.

The costumes can only be described as awesome when compared to the comical outfits worn at pantomime. Full kimono of vibrant colours and bleached white make up create a stunning vision of female beauty, coupled with poise, and delicate coy movements to create a wonderful female illusion.

Modern Kabuli has evolved into a more stylised art form to maintain the traditional aspects of the art. There a frequent tours that play to packed houses, with actors such as Tamasaburo (http://www.tamasaburo.co.jp/index.html)
and Kyozo Nakamura (http://www.kabuki.ne.jp/kyozo/english.html )
showing their traditional work and culture to new audiences  worldwide.
For more information, have a peek at the UNESO website to get an overall view of Kabuki.
http://www2.ntj.jac.go.jp/unesco/kabuki/en/index.html 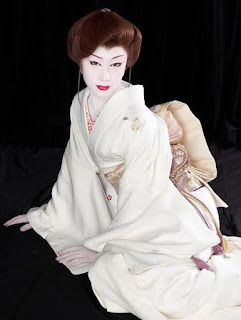