Life in the Fast Lane

I have a full time job on an oil platform in the North Sea as a Nurse (platform medic) that has been documented here in the past, but I also have a part time job as an Occupational Heath Nurse Advisor, where I advise on how to support individuals who have illness or conditions that may  affect them in the work areas, and help those who are off work get the right support and ease them back to work when deemed fit to return.

Occupational Health is the interface between people and their working environment, where potential hazards are assessed and mitigated, exposures are measured, and preventive measures are designed and imposed.

These two sides of my professional life came together recently when I was asked to give a talk on offshore occupational health to the ‘Association of Occupational Health Nurse Practitioners’ study day.

The Association has a facebook forum that it uses as its main information and communications focal point and I am registered there under my female identity, as I don’t have an account in my male persona.
This has often been of benefit to the Association as I am able to advise on transgender issues that some practitioners come in contact with in their work areas and professional practice.
So I planed to give the presentation en-fem, as they were expecting to see me there from the forum advertising.

The study day was arranged by one of my collogues who is the occupational nurse manager for Williams F1 - a formula one race team, and had secured four other speakers who were to give a discussion on various topics such as travel medicine, the legal aspects of Occ Health update and review new research.

My day stated out well as I had driven from home in my Landover and found a lovely spot to camp nearby with some stunning views over the country side next to some racing horse gallops.
After a light breakfast I dressed in some grey wide legged trousers with a wool grey roll neck top, purple shoes and my favorite Jager short purple jacket.
The impression I wanted to give was ‘smart professional’.

The short drive to the F1 headquarters was fine, but I had to negotiate the early morning rush hour traffic, but eventually found the main gate and was ushered in and directed to the car parking area.
The site was large and impressive. The buildings were all ultra modern with great views, and the car park was full of interesting cars of all makes, becoming of the workforce intertwined with speed and technology  - my Landover was the polar opposite of the general theme !

I was met at the conference center by one of the hospitality team and directed to the area where we were the event was bing held and met some of the others who were attending.
It was lovely to put faces to the names of people I have been working with on the forum site for several years and be accepted as one of the peers.
My Fem side was not even blinked at when introduced, it was just taken as part of me and totally accepted.

My Mumble - Death By Powerpoint!

The event stared with an introduction from the people running the study day and a quick run round of introductions from the attendees. There were about 50 people in the audience and I had not met anyone face to face before.

My presentation was due to be the last one as it was the longest. I had made it applicable to the venue by using the F1 team as a link between the oil and gas industry and the use of hydrocarbon in the production of products that are in common day usage.

I stared the talk by apologizing that I wasn’t as glamorous as  Danny LaRue, as funny as Eddy Isard, or as sharp as Lilly Savage – this seemed to break the ice and I explained my TG status, offering to talk to anyone about TG issues if they ever had the need.

The talk went well and I had lots of interesting questions and positive comments fed back to me about the subject matter. Sadly I overran my 40 mins to end up at an hour .. so have apologised to the organiser as she was supposed to be giving a talk after mine which she canceled politely saying that mine was more interesting than hers would have been anyway !  (I felt very guilty and apologised several times after !)

At the end of the day we were able to visit the heritage museum that was in the building and one of the team pit crew was able to show us around the cars on show.
These included several world championship winning cars from the past, right up to the previous years racing car and the development cars from the new E series.

I was able to let my inner geek out and enjoy seeing all the history and technology that was on display, and tap into the mind of information that the guide was able to impart on us about the cars and the drivers who used them. 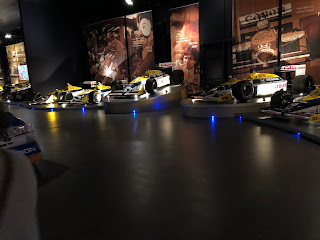 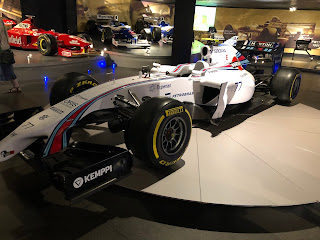 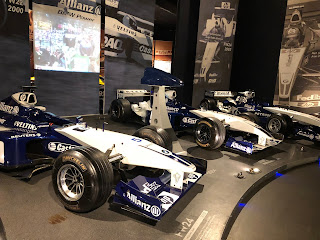 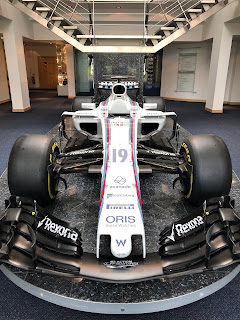 After a quick visit to the shop to buy some gifts for the lads on my platform, I made my way out and headed south at a rather sedate pace compared to the cars in the site!

On the way out of the gate, I came nose to nose with the large HGV lorries that were returning the race team from the Monaco Grand Prix that had been ran a couple of days previously – it was a very impressive convoy!!

I have been asked to do another talk in the future on a relevant topic .… but I may have to be more critical on my time keeping before I get to go back !

Please note - my presentation has nothing to do with the teams fortunes in the current season.... hope that they get to win some points this year  ......